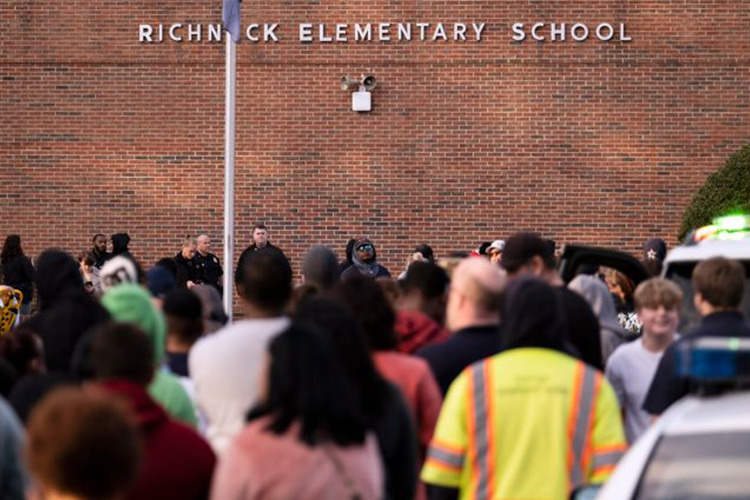 A crowd gathers outside Richneck Elementary after the traumatic shooting committed by a six year old student of one of their first grade teachers, Abigail Zwerner. Photo by Carol Alvarado

The new year kicked off with another school shooting tragedy– what happens when a child as young as six shoots his own teacher?

Violence statistics in America haven’t decreased recently. Nearly every year, the nation is faced with new, terrifying information regarding how many shootings occurred in just the span of twelve months. The number is always worse than the last, and 2023 doesn’t seem to be going in any different direction.

Just six days into the new year, Richneck Elementary school in Virginia experienced what no school ever should. While a shooting is never expected, one at the hands of a six year old child seems like it should be impossible – how would a child so young be able to get his hands on a weapon and purposefully use it against another person?

It is a question that should never have to be asked, though unfortunately it’s one that has plagued minds all across the nation since a first grade student shot and wounded his teacher during a classroom altercation. Luckily, no students were injured during the shooting, and the teacher, identified as 25-year-old Abigail Zwerner, is alive. She sustained life-threatening injuries, though later after the incident it was reported that her condition was improving slowly.

Police reported that the shooting was not an accident. School officials later came out during an online meeting with parents a week after the incident and stated that they were notified beforehand that the student may have potentially been in possession of a weapon on school campus. Administrators had searched the child’s backpack, but hadn’t found the handgun he had later used on his teacher.

The gun, a loaded 9mm, reportedly belonged to the child’s mother. It’s unknown how the student managed to gain access to it, though once he did, he put it in his backpack and took it to school with him.

Now, authorities are between a rock and a hard place in the face of a six year old committing such a serious offense. Since the shooter is so young, he won’t be charged. This is due to legal policies in the U.S. that keep children from being charged with crimes until they surpass a certain age.

It’s possible that the parents could face charges for it, since the gun was purchased by his mother and was kept loaded. In a similar case from twenty three years ago, where another six year old fatally shot his classmate, Kayla Rolland, the parents of the shooter were indicted on several federal weapon charges. The parents pleaded no contest to involuntary manslaughter and counts of neglect. It’s unknown as of now what will happen to the parents of the child in this current case, though it’s very likely that they will be held accountable to some degree.

Since 1970, there have only been a total of eighteen shootings committed by children under the age of nine, including the murder of Kayla Rolland and the recent shooting of Zwerner. Several child psychologists have examined cases like these, and most have come to the same conclusion: children not knowing the seriousness of the weapon they’re holding in their hands, and treating it like a toy.

It’s extremely important for these reasons that if a parent or guardian owns a weapon and keeps it in their home that it needs to remain unloaded and inaccessible under any circumstance to their children. These rules can generally be found posted on any firearm information website, and are also cited on the Nemours Kids Health website.

Research done by Carmel Salhi, a professor at Northeastern University, showed that nearly 70% of parents are under the assumption that their firearms are safely kept, and that their children are unable to access them, though their children are under a different impression. Over a third of adolescents from ages thirteen to seventeen report that they’re able to gain access to their parent’s loaded firearms in fewer than five minutes. Nearly half can do it in 60 minutes.

In the wake of school shootings becoming more and more frequent, this is an alarming statistic. It’s been proven that guns kill more children in the US than cancer does, in instances such as school/mass shootings, suicides, domestic violence, gang-related shootings, and even just accidents.

America is prone to gun violence; adolescents and children are in no less danger than adults are. It’s incredibly important that firearms are treated with the utmost care and stored in a way that prevents kids from getting their hands on them. It’s too easy for children to mistake a real gun as a toy, or for an adolescent struggling with their mental health to gain access to a tool in order to hurt themselves or others.

It’s necessary that parents remain aware of the proper procedures of storing firearms, if any, in their homes. It’s a small step, yet plays a huge factor in preventing instances like the Richneck shooting. A child as young as six pulling a gun on someone is a terrifying story to see on the news – and now, it’s happened twice. In a country where gun violence involving youth is not rare, it’s important to keep an eye on children. Signs appear beforehand, and are often not seen until too late.

The recent events cement the crucial idea of gun safety – the result in ignoring such can be catastrophic.