‘Twas the Night Before Finals 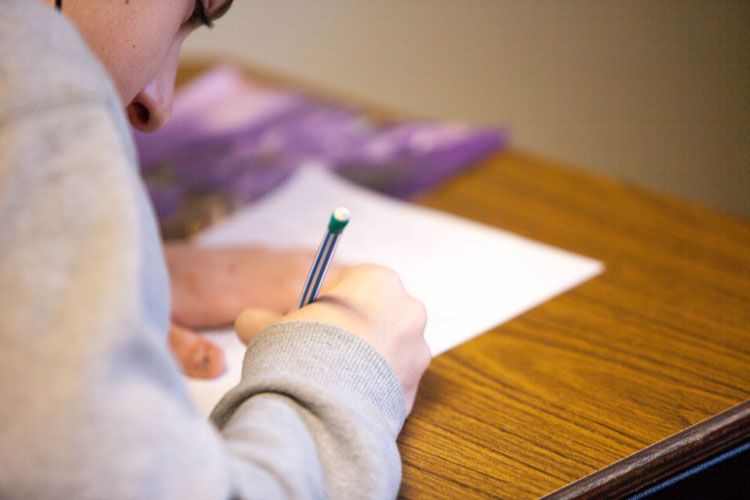 Final Exams can be stressful, but when students are prepared and well-rested, the week becomes more manageable. photo courtesy of unsplash.com

‘Twas the night before finals, and all through the school

Not a student was studying, not even an amount miniscule;

The zeroes were posted on Infinite Campus with care,

In hopes that students would give it a glare;

The teachers were pacing all around their rooms;

While visions of passing-grades were essentially doomed;

With Christoff in his office, and Poole in his closet,

When up in the library there arose such a clatter,

I sprang from my seat to see what was the matter.

Away to the door I flew like a flash,

Knocked over my water and caused a big splash.

The warmth of the printer revealed quite a show,

Gave a vision of passing to students below

When what to my wondering eyes did appear,

But an illustrious study guide with answers included,

Explanations and work leaving nothing alluded,

I knew in a moment I wasn’t unguided.

As notes that before had seemed daunting and tall,

When met with plot summary, didn’t seem so bad at all;

So up to the library the scholars they flew

With hands full of pens, and highlighters too—

And then, in a moment, I heard in the room

The scrawling and scratching of a studying boom.

As I finished my worksheets, and was turning them in,

My teacher thanked me and gave me a grin

A wink of their eye and nothing else said,

Let me know that I had nothing to dread;

They spoke not a word, but went straight to their work,

Replacing my missings with a slight bit of irk,

They held their finger over the key,

And giving a sigh, up the ranks my grades rose like a tree;

They sprang to their cars, giving their jobs a much needed farewell,

And away they all flew, taking two weeks off was not a hard sell.

But I heard them exclaim, as they drove out of sight—

“Happy Finals to all, and to all a good night!”

With finals starting on Monday, December 17th, it is important to know that your grades, while important, do not define you. That being said, make sure to catch up on any late work, study all relevant materials, and get plenty of sleep. Monday will be your 2nd, 3rd, and 4th period finals, Tuesday will be your 6th and 7th, and Wednesday will be your 1st and 8th. Click here for a detailed Finals Week Schedule. Do your best and finish the semester on a positive note, TJ!