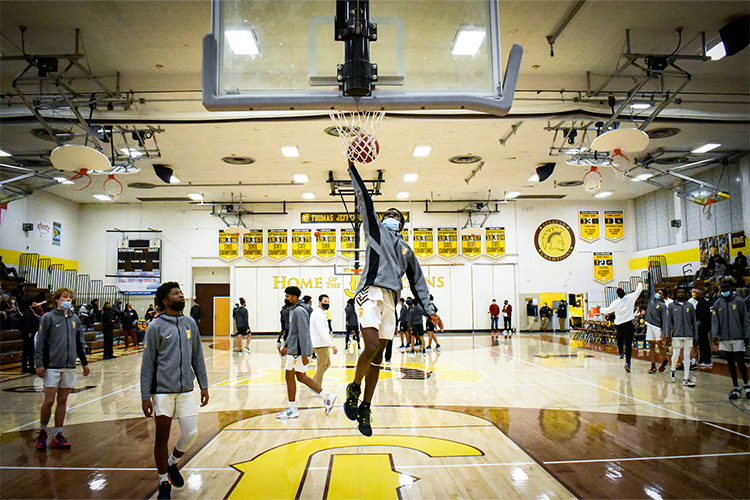 Varsity Boys’ Basketball warms up before their game. photo courtesy of Yearbook staff

Though it has come to an end, the Thomas Jefferson High School Boys’ Basketball team had an incredible season. Buzzer beater after buzzer beater, every single home game that the boys played was a win. Their cohesiveness as a team was clear to everyone who watched them, and the amount of support from crowds this year was optimal after the COVID-19 season last year. Though they didn’t quite make it as far into playoffs as they might have wanted, the team still represented the school well and will continue to be a force to be reckoned with in future seasons.

The boys’ season, with a record of 15 wins and nine losses, ended with a heartbreaking loss against Riverdale Ridge High School with a final score of 69 to 67. However, these boys aren’t strangers to close games. In fact, the sheer amount of buzzer beaters scored by the basketball team has created a lot of interest; two game highlights, buzzer beaters scored by Will Perkins and Doren Sacha, made it to the news. Perkins’ buzzer beater against Chatfield and Sacha’s against Far Northeast allowed the team to take the wins. 9News even had a feature on both of them – clearly the team’s prowess this year attracted some serious attention. Though Perkins and Sacha are both only sophomores, they’ve been some of the top scorers for the team this year, and their clear positive impact on the team has been well received. “Everyone’s been super welcoming,” said Perkins. “Getting to know everyone and getting better together every day has been such an amazing experience.”

There are four seniors on the team this year, and the loss of seniors can be an extremely detrimental thing to a team. However, Perkins is not worried. “This team picks up the slack. If one player is gone, someone else fills in and steps up,” he said. Last year, the team lost seven seniors and still managed to play extremely well this season, so Perkins is keeping his standards high for next year’s team. This season was also a positive experience due to the fact that mandates on spectators started to lift and the team was able to have a student section for the first time in nearly two years due to COVID-19. “George Washington was the best game this season by far,” said Perkins. The game against GW was largely a favorite of other levels of play as well. Jake Scobey, a sophomore on JV this year, agreed with Perkins. “That game was just on another level,” said Scobey. “The energy was so high and tickets sold out almost immediately.”

Many of the Varsity games have been like GW – high energy, high scores, and great plays. However, one game stood out to sophomore Sloan Steimel as a game where the team struggled a bit. “Our game against DSST GVR was a really tough loss because we knew we were better than that,” said Steimel. “From then on, though, we knew that we could never underestimate a team again so we worked harder at practices and won seven of the next nine games that we played.” After that loss, the team changed their mentality towards the season and understood that in order to go as far as they wanted to, they would need to work harder and more cohesively. And as shown by their record of 15-9, the boys did perform in the way that they wanted. Though some games may have been not quite as good as others, the team understood what it takes to push through adversity and take the win, which is a quality that will allow them to go even further in their next season.

Though it is unfortunate that their season ended right as COVID-19 mandates started to drop, the team still performed amazingly this year. Without a doubt, TJ boys’ basketball will continue to be a force to be reckoned within the district and throughout the state as well. From incredible buzzer beaters to blowout wins to well-fought playoff matches, TJ Boys’ Basketball has had some incredible moments that will stick with them for a long time.