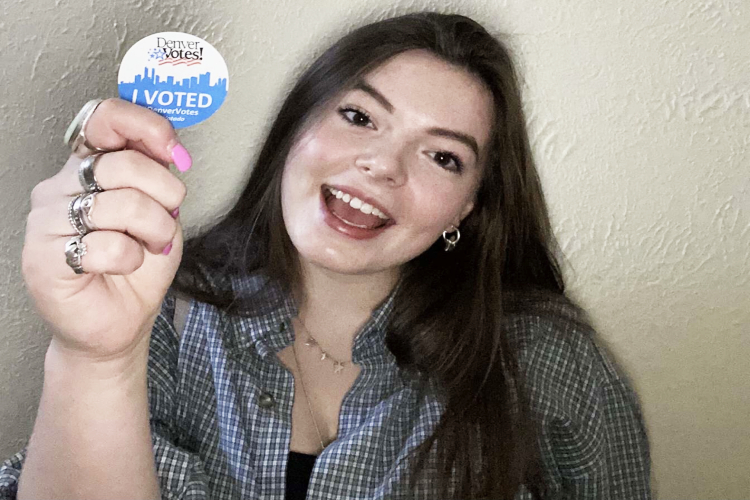 Grace Coviello adorned with her ‘I Voted’ sticker from the presidential primaries. photo courtesy of Grace Coviello

Eighteen-year-olds across the country are beginning to participate in their first national election amidst the unconventional year of 2020.

This year has been nothing short of a whirlwind, now with the election added in the mix. In preparation for the national election on November 3rd, primaries were held in March, which served as the first election high school voters participated in. The presidential primaries determined the two major candidates on the ballot: the incumbent President Donald Trump and former Vice President Joe Biden. The 2020 election is extremely significant due to many ongoing crises, including the handling of the pandemic, the response to the Black Lives Matter movement, and the climate crises rocking the West Coast. Young voters have expressed their desire to make change through the most impactful way: voting.

“Why not speak up [against] the system that’s constantly running your life? Use your voice,” said Grace Coviello, a senior at TJ who is planning on voting in this election. Pew Research Center stated that the makeup of Gen Z voters this year is “about 16 million more than could vote in the 2016 election,” yet voter turnout ultimately drives how big of an impact they will have. The misfortunes of this year have prompted the mass sharing on social media of infographics, campaign videos, and exposed information of faulty governments from state to national levels. It is clear that America’s youth are involved in this election, and those who cannot yet vote are urging those who can to fill out their ballots.

Across the board, both those who can and cannot vote have been signing petitions, calling government officials, and attending protests in order to inspire change. As the nation approaches the final stretch before the election, advocating for active voter participation is crucial. Grant Vanderiet, another senior at TJ, stated, “I go on my Instagram and I’m constantly seeing posts and people sharing stuff about how important it is for young people to vote.” This collective activism, although often performative, serves as a basis for influencing who to vote for and how to do so. Engaging in trends boosts people’s standing on social media, so it is easy to repost something without putting any effort into learning about it. As much as teens are active, posts can dangerously be their only source of information. Both Coviello and Vanderiet make sure this is not the case by accessing multiple news sources. Credibility is crucial when looking at the best place to gather information. “I just feel like some news broadcasts are a little more biased and I don’t wanna hear as much of a biased opinion,” reasoned Coviello. This open-mindedness sets first-time voters up for success, bringing promise for this election and those in the future.

The impacts of the pandemic have shown these 18-year-old voters the importance of thinking about the future when casting a vote. The pandemic has stolen nearly 220,000 Americans from their families and changed everyday dynamics. The racial injustices that have also been plaguing the country have recently come to light, with arrays of protesters armed with masks. Decisions made by politicians in the past have been catching up to the American people, like the increased emissions of greenhouse gas into the environment in turn igniting the wildfires throughout the western United States. “I think my age group is definitely [influential this election year] because we are the future of America, especially with issues in the environment which are so time [sensitive],” expressed Vanderiet.  Although seniors are preoccupied with submitting timely college applications, they understand that other timely issues carry distinguishable weight. This is an important mindset to obtain going into this national election.

With all of these factors influencing people’s votes this year, it is important to recognize the privilege encompassing voting. Persistent members of Gen Z understand now more than ever how important their voices are and that their vote truly does matter. In her final remark, Coviello stated, “I think if enough of us in this age range go out and vote, we can make a really big impact on the outcome of this election.” Listening to others talk about voting can only do so much, so the first step is to register as a Colorado voter. TJ’s Advisement period for juniors and seniors brought in the Colorado Democracy Challenge on October 21st and 22nd to get students registered and pre-registered. In the state of Colorado, 16-year-olds are eligible to pre-register for upcoming elections. In order to do so, students must have a state-issued ID, such as a license or permit, and/or the last four digits of their Social Security Number. For the 18-year-olds who have already registered, ballots have been sent out, so go vote! Use your ballot to speak for the marginalized communities, to speak for the undocumented Americans, and to speak for the future.