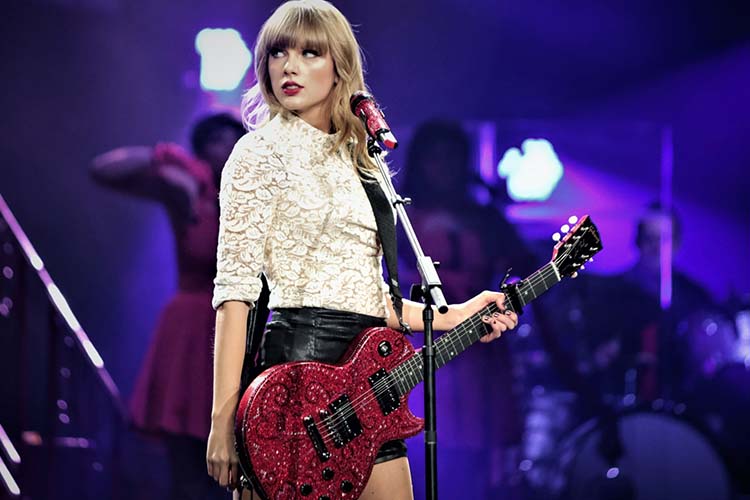 Taylor Swift performed on stage with a red guitar during her Red tour in 2013. photo from Flickr, captured by Jars McLucien

Taylor Swift released her album, Red (Taylor’s Version), and everything has changed.

On November 12, 2021, Taylor Swift re-released her album, previously written in 2012, Red (Taylor’s Version). Swift not only gave her listeners the songs they know and love from the original album, but an additional ten tracks from ‘the vault,’ including a ten-minute-long version of her single “All Too Well.” Her reinvigorated album features top artists like Phoebe Bridgers, Chris Stapleton, Ed Sheeran, and Gary Lightbody. In pure Taylor Swift fashion, she decided to continue shocking her fans by producing a 10-minute long short film for “All Too Well,” with Stranger Things’ actress Sadie Sink and Love and Monsters actor Dylan O’Brien. This is her second re-recording of one of her albums after the release of Fearless (Taylors Version). Already award-winning and record-breaking, Swift has had a tight hold on the music industry for years.

When Swift was only 15 years old, she signed a six-album record deal with Big Machine Records, then owned by Scott Borchetta, giving the label full ownership of her albums. After Scooter Braun acquired Big Machine Records, he gained possession of Swift’smasters then sold them once again to Shamrock Holdings. Swift was unaware of these transactions and attempted to gain ownership, but she was unable to. Despite not having possession over her past music, Swift found a loophole in the legal copyright system. This allowed her to block the use of any of her music in new projects that require a synchronization license. Since then, she has been re-recording her old albums to reclaim her rightful ownership.

The Red spotlight is on her recording of “All Too Well,” the 10-minute version, especially after Swift said she was most excited for that track. What started as a breakup song written about an unstable relationship 11 years ago was transformed into a song for Swift and her fans. The ten-minute-long song was rejected for any release; Swift was told that it was too long for an EP and that it would not be beneficial to add to an album at that length. But this song has reached monumental heights despite the duration. Swift broke the World Record for the longest song to reach No.1 on the Billboard Hot 100, along with 25 other songs breaking the Hot 100. This song has touched millions of fans, resulting in a spew of kind words on talk shows, from fans, and billions of listeners globally. The song describes the highs and lows of an unstable relationship with a manipulative man with whom Swift was infatuated. Her self-declared “Swifties” have been mercilessly dissecting this song, especially with the actor who inspired the song. This song touches on their age difference when they dated, especially their power dynamic. She also discussed a metaphorical and/or literal ‘scarf,’ and goes in-depth with the suffocating grief that results from heartbreak. It is an incredible story that Swift manages to make into an emotional, heart-filled song, which is clearly why she saw fit to release a short film as well.

Swift directed, cast, and acted in her short film featuring her song “All Too Well.” Watching it on November 12th, at 5:00 pm, I was entranced by the story, acting, and music. While watching, I read many of the comments and live reviews. People all over the world found this film astonishingly mesmerizing. The compilation of Swift’s hard work finally being shown and admired reminded me of what Taylor Swift means to billions of people. As Lindsay Zoladz wrote with the New York Times, the accumulation of Swift’s work among “All Too Well” is about “the weaponization of memory.” The film does not portray any winners, losers, heroes, or mind-blowing concepts. She simply demonstrates pure love, loss, and heartbreak. Sink and O’Brien were incredible with their performances with their rich chemistry captivating their audience. The short film was incredibly cinematic, feeling like a full movie despite only being ten minutes long.

Swift writes music for those of all ages and all walks of life. I have vivid memories of listening to Swift’s albums on an old iPod Mini wrapped in gold duct tape. Unbeknownst to 8-year-old me, these songs would be listened to on repeat for years to come. Swift has the ability to write songs that can apply to any feeling and every major milestone. For years, Swift and her fans were told that the only songs that she produces are about her ex-boyfriends. Swift pointed out that when male songwriters wrote about their partners, they had never had to deal with any backlash comparable to what Swift has experienced, especially originating as a young pioneer in the music industry.

In the past few years, Swift has not only been building her empire but empowering people all over the world. She has taught her listeners how to stay true to themselves, how to respond to criticism, and how to grow as a person. Moreover, she validates every feeling that people feel from heartache to nostalgia to despondence. No matter what feeling someone could endure, there is a Taylor Swift song that encapsulates those emotions. I feel proud to have been able to watch Swift go through each of her eras and to be growing alongside her.