When in Doubt, Coach it Out 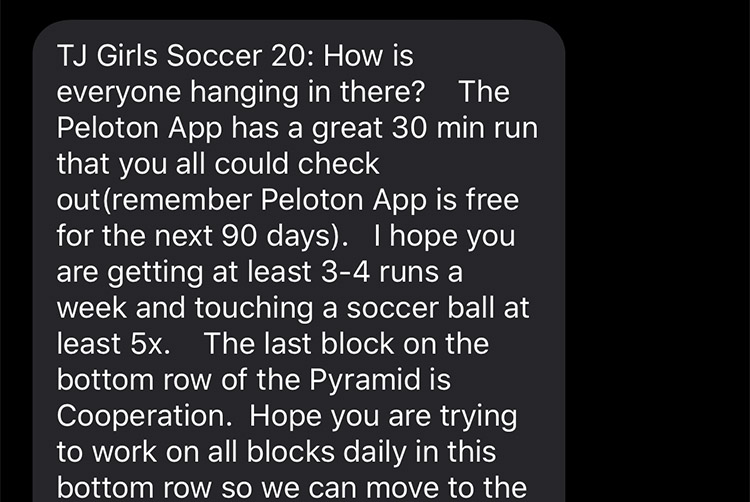 Beth Hinz continues to be a motivating force for her players despite not being able to coach them. photo by Ella Stephens

Girls’ Soccer Coach Beth Hinz continues to motivate her players even after the season has been canceled due to COVID-19.

COVID-19 has impacted everyone around the world at a very intense level, including sports. All levels of sports have been canceled, and for seniors, this has been a very difficult time. As a senior, it was very hard for me to come to terms with the fact that my last season of soccer was in the fall. High school sports were canceled on the Thursday of our first game; we didn’t get a single day to wear our uniforms with pride.

As this has been very hard for players of all ages, some coaches have been reaching out to their players in order to keep their spirits up. Coach Beth Hinz has been doing an amazing job at both being positive and heart-warming, as well as making sure we maintain our fitness level, and is even trying to plan summer sessions if Colorado were to flatten the curve. At least for me, Hinz has been very kind, and she helped me cope and appreciate the soccer season, even if it was only for a couple of weeks. “My continued communication and encouragement was to encourage growth for all of us despite not being able to train and play games. It was also for selfish reasons because I could not wait to work with this team and I was hanging onto any bit of hope we perhaps could all be together for a few games and training sessions, whatever they may look like,” explained Hinz.
At the beginning of the soccer season, Hinz had a huge influence on her team. She had many rules to keep her players safe and confident, but one of the most influential methods was using the John Wooden Pyramid of Success. This pyramid highlighted the characteristics a player must have in order to be successful. During preseason, the soccer team would meet in a classroom and discuss some elements of the pyramid, and how we can incorporate each feature into our playing, as well as our mindset. Some of these features include friendship, and loyalty, and industriousness, which means working hard and carefully planning. This allowed the players to not only know what they need to do to succeed but it also showed the team that in order to play well, they needed to be bonded. Even after the season was canceled, Hinz continues to send messages to the team regarding the pyramid. “My hope was the communication would provide some different ways of coping with the COVID stoppage by using John Wooden’s Pyramid of Success,  to create an understanding that success/survival at this time would look different than wins on a soccer field.” Not only was this well thought out and kind, but it also helped us keep a good mindset during these difficult times.

Not only did Hinz continue to send her team the fundamentals of success, but she has also been sending us workouts to keep in shape. With COVID-19 in full swing, many fitness programs are offering deals in order to keep in shape at home. For example, Coach sent us a link to the Peloton program, which is offering a free trial for those who want it. She is also encouraging us to go on runs, eat right, and keep a positive mind during these uneasy times. This may not have been helpful to everyone, but it sure was helpful to me. It is nice having someone who is looking after us, even though she isn’t able to do her actual job. By doing these things, it shows that our coach is committed to her team, and many players are optimistic about next season and what she will do with her dedication. “The plans for next season will be similar to what they were for this season, which is to assess our skills and improve upon them, tactically implement a system that will use the team’s strengths to defeat our rivals, increase/develop the team’s physicality and build a team confident in its success, regardless of its win/loss record.”

We all knew that Coach Hinz was going to have an amazing impact on her team, whether we were playing or not. With her experience and her positivity, the girls’ soccer team is bound to make waves during next year’s season.

PC: Beth Hinz continues to be a motivating force for her players despite not being able to coach them.