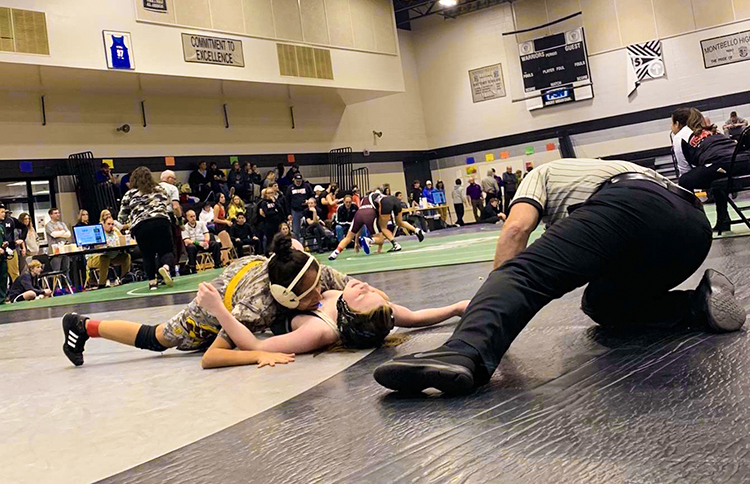 Senior Fatima Dorantes wrestles a student from another school with referee counting down time. photo by Beatrise Bicudo

A new team and a new year brings the TJ wrestlers to many victories, while uniting the boys’ and girls’ team.

There have been many new recruits to the boys’ and girls’ wrestling season which began on November 18, 2019. Becoming a wrestler takes courage and many different qualities are necessary to become a great athlete. Junior Beatrise Bicudo explains, “If you throw a move and you don’t commit to it and you do it wrong, the other person can take it as an advantage. So, just make sure you’re technical, you’re strong, and you’re fast.” These qualities help wrestlers understand the concept of how to move and what the best move would be during a wrestling match. The whizzer move in wrestling will take an opponent out safely. It is often used as a first alternative to beating the other wrestler and is a great move to use. Critical thinking should be one of the main concepts that an athlete practices when trying to win a match. Being an advanced wrestler means having the ability to train the mind and body to act in the moment. Being a wrestler also means knowing the main rules and regulations when competing in a match.

In this after school sport, meets and practices are frequent. The practices help wrestlers become better at certain moves and make sure they’re getting the right information on how to take an opponent down. The team practices an average of eleven hours per week to make sure everyone works to better themselves. In the event where a wrestler loses their first match, the highest placement they can possibly get would be third place. In some tournaments there are five matches to determine who will make the top finals, but if a person loses a match, then they’ll automatically be out. Even though the teams are working together, they have different schedules to make sure that boys compete with boys and girls compete with girls. Bicudo mentioned, “Having both teams together is really beneficial because you can get two different perspectives on how to beat your opponent.” Both teams use their techniques to better themselves and get a different perspective on different strategies.

Coaches Bill Burns, Woody Bonner, and Logan Vargas bring these teams together with their efforts of leading as a unit. Coaching one team is hard enough but coaching two teams, which can be similar but are very different, can be difficult. This season the teams are preparing for their state competitions which took place February 18th for the girls’ team and will take place February 20th-22nd for the boys’ team. Senior Zasha Norris proudly claimed her first place prize in the state competition among many other schools and Junior Isaias Estrada took first place in the state championship for the boys’ team. Also, Senior Thomas Garnicia won fifth place alongside the other competitors. The entire season leads up to the moment where wrestling is all that matters to these young athletes competing for first place. It takes a lot of practice to be on the wrestling team which means knowing how you will approach the opponent and assess what move is best. All in all, the boys’ and girls’ wrestling teams put a lot of effort and hard work in to make sure they win as many matches and tournaments as possible. They do this while learning valuable characteristics like thinking critically to help them at state competitions.