Will Concerts Happen This 2021 Season? 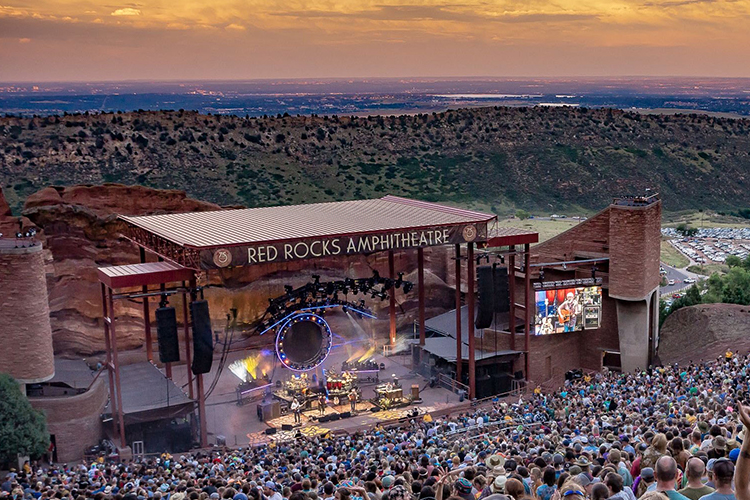 Crowds of music fans gather for a concert at Red Rocks pre-pandemic. photo courtesy of redrocks.co

After the cancelation of the 2020 concert season, many wonder whether or not fans will see concerts this 2021 season.

With the diminishing concerns surrounding the pandemic, vaccines being released, and people making do with the new world, the question arises of whether or not summer concert tours will happen in 2021. Typically, concerts are played outside throughout the summer from mid-spring through mid-fall; however, the pandemic canceled 2020’s concert season. Overall, concerns surrounding the pandemic are still valid and in the end, there is really no definitive answer on whether or not concert-goers will be at Red Rocks this summer. All fans can do is keep their fingers crossed and their hopes high.

While many summer concerts are held outside, the concentration of so many people in one space is a sure way to spread COVID-19. Even though wearing masks might help, they would not do much in a situation where 20 people are within a six-foot radius of each other. While many Americans have different risk levels that influence whether they are able to socialize or not, concerts promoting the expansion of cases would not be a good thing for anyone. Being a liberal state, Colorado has held tighter restrictions on COVID than other states. Overall, this has held out well, and the state has seen fewer cases and deaths than many others. Will Colorado allow for these events to occur?

Unfortunately, according to USA Today, concerts and festivals will most likely not take place until 2022. This USA Today article also discussed how the slow roll-out of vaccines to Americans will cause immunizations to not be done until mid-summer, meaning large gatherings will still be discouraged. For many this is frowned upon; however, it could be in best interests, as the virus will most likely be eradicated for the summer of 2022’s concerts if Americans comply with certain guidelines. Many people will be upset by this. Last summer, instead of refunding tickets, all Red Rocks tickets were just moved out another year. This can be frustrating, as people may move away for college, lose interest in an artist, or just want their money back.

As of now, all concerts are still on for Red Rocks this 2021 season. Hippie Sabotage is a popular band among students at TJ that will be performing on May 7th. In a conversation with junior Alex Swats, Swats mentioned, “If it doesn’t happen, I hope the concert gets rescheduled for the end of the summer so that there’s a higher chance of people being vaccinated and being able to go.” While this is a hope of many, this desire may be impossible, as other venues will be reserved for late summer dates. If all venues are rescheduled for later in the summer, two and three-day venues will be canceled, upsetting ticket holders and causing other issues. Another concert enthusiast, junior Sawyer Beach, noted, “I heard concerts will happen and only be open to those who have been vaccinated. Hopefully, the vaccine will be available for kids so I can get mine and be eligible for concerts!”  Unfortunately, this would really upset concert fans who have not received the vaccine, however showing vaccination cards would be a similar process to showing ID’s, making it manageable for concert venues.

All in all, the pandemic has greatly impacted the entertainment industry, as people are discouraged from attending large gatherings to prevent the spread. Will Americans see concerts this year? Probably not, but concert-goers should keep their fingers crossed and their hopes high that they will be singing at sunset at the Red Rocks Amphitheatre.