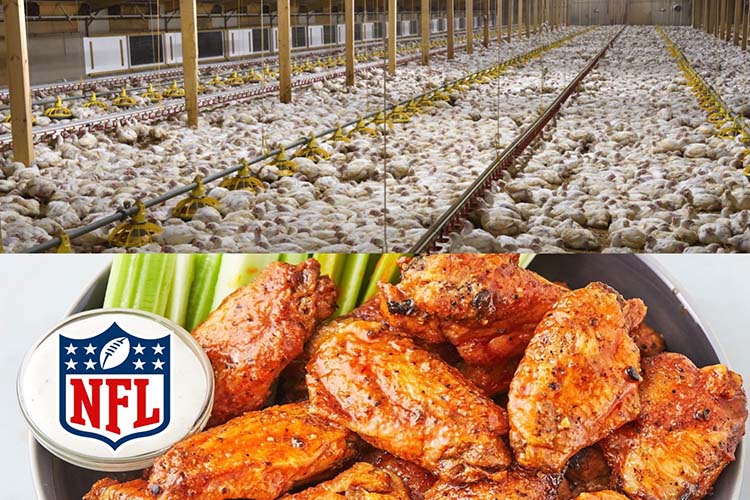 Chicken factory farms are supplying fans with billions of chicken wings for the 56th Super Bowl. The Human League, NFL.com, and Delish.com

The truth about the chicken industry in relation to the Super Bowl.

The Super Bowl is one of the most-watched sporting events in the United States. This well renowned game could not be celebrated without counter tops filled with food, especially the classic edition of chicken wings. During the average Super Bowl weekend, around 1.42 billion wings are consumed, meaning around 700 million chickens are slaughtered. The website Time announced the amount of chicken bought and ingested weighs more than all 32 of the current National Football League (NFL) teams and is enough to put 572 wings on each seat in every NFL stadium.

The U.S. chicken wing market revolves around the sports calendar and spikes during popular events such as the Super Bowl. However, chicken wings did not become a common game day snack until they were introduced to bars in the 1980s. At first, chicken wings were priced incredibly low, due to lack of demand until the Wing Bowl, one of the most prestigious eating competitions that ran from 1993 to 2018 and raised the demand for wings. Today the wing prices are more expensive than ever and retail wing prices are $0.30 more per pound than last year. Michiana’s News Channel (MNC) added, “many costs, like the price of chicken wings, have increased because of unusually high demand, record input costs, labor shortages that have reduced the supply of many goods, and government spending programs that have flooded the economy.”

Although the pricing in chicken wings is higher this year for the Super Bowl, stores are stocked up and ready. Competing in the 56th Super Bowl are the Cincinnati Bengals and Los Angeles Rams, and it has been recorded that wing sales in Cincinnati have seen a 27.6 percent increase and Los Angeles a 37.3 percent increase compared to the same time last year. Fans have supported their team throughout the NFL playoffs and would not have been able to enjoy the game without eating chicken wings.

Although celebrating the Super Bowl with wings has become an American tradition, many people forget about the consequence that comes with eating up to 1.42 billion wings. As a result, around 700 million chickens’ lives are ended to satisfy the hunger of fans watching the Super Bowl. The chickens’ live inhumanely in the chicken factory farm, and the way their lives end is tragic as well. The Humane League (THL) included, “Chickens are the most populous farmed animal in North America and account for the most deaths in slaughterhouses.” The moment a chicken is born on a factory farm they are treated inhumanely. Chicks begin their lives in massive hatcheries along with thousands of other chicks who never meet their parents. Factory farms have lamps that provide artificial heat that replaces the warmth of their mother’s body, where the chick should spend the first few days of life underneath her wings.

The inhumane treatment does not stop there, as chickens grow up they are not allowed to spend time outdoors and are confined in crowded indoor sheds most of their lives. Chickens are treated inhumanely because of their limited purpose in life: their eggs and meat. Factory farms do not care about the chickens’ well-being and experience extreme confinement, surgical procedures (performed without painkillers), as well as the denial of socialization. The treatment of factory-farmed chickens is tragic, but the way their life ends can be even more devastating. Chickens can be killed in numerous ways, but one of the most common methods of factory farms is live-shackle slaughter. The chickens are first electrified, then their throats are slit, and they finally cast into a scalding bath designed to remove their feathers. Sadly, this method is not as effective as you might think and many chickens are boiled alive. The treatment of chickens can easily be ignored as people are not educated on how chickens live on a factory farm as well as how they are brutally slaughtered.

The Super Bowl is a very exciting time for fans and people across the country, and the wings are a must for many viewers. The National Chicken Council predicted in their 2022 Wing Report that 1.42 billion wings will be eaten during the big game on Super Bowl Sunday. Although eating chicken wings has become a tradition, people need to be informed on the inhumane treatment of chickens and the excessive number of chickens being killed just for one weekend of eating chicken wings.