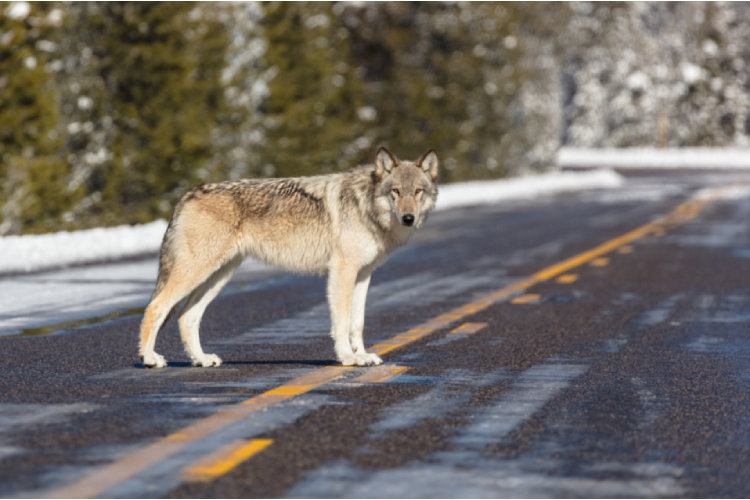 After decades of gray wolves’ absence, Colorado voted yes to reintroducing them into our mountains.

Between 1930 and 1940, there were intense efforts made to eradicate gray wolves throughout the western United States. This was due to the mass killings of cattle and other farm animals caused by the species; it resulted in the desire for predator control. In Colorado, the last surviving gray wolves were killed around 1940. Considering how targeted the species was, the International Union for Conservation of Nature classified gray wolves as a federally endangered species in 1978.

After a variety of attempts were made by organizations, volunteers, and campaigns to petition for the reintroduction of gray wolves in Colorado, a voting option was placed on the state’s November ballot. It is known as “Proposition 114: Gray Wolf Reintroduction Initiative 2020.” The measure would require the Colorado Parks and Wildlife Commission to establish a plan to reintroduce and manage gray wolves by the end of 2023. Wolves would be reintroduced on Colorado lands west of the continental divide. Where the wolf reintroductions will take place is unknown at this moment since the commission must determine a safe and prepared location. The measure would direct the state legislature to make appropriations to fund the reintroduction program. The commission would also manage any distribution of state funds that are made available to pay fair compensation to owners of livestock for any losses of livestock caused by gray wolves.

The Rocky Mountain Wolf Action Fund (RMWAF), associated with the nonprofit Rocky Mountain Wolf Project, led the support campaign for this initiative. The campaign had raised $2.28 million to make sure that it had an official spot on the November ballot. Rocky Mountain Wolf Action Fund (RMWAF) has claimed that the reintroduction of wolves would restore natural balance to Colorado’s ecosystems. RMWAF President Rob Edward said, “Gray wolves are the ecological engines of the northern hemisphere. Since the 1940s, when Colorado’s last wolf was killed, our ecosystem has suffered, knocked out of balance. Without wolves keeping them alert and moving around, elk and deer strip away vital streamside vegetation, leading to erosion and the disruption of habitat, threatening beavers, songbirds, and even native trout.” The success of RMWAF’s operations and the great amount of money they raised has shown how many Coloradans desire the reintroduction of gray wolves in the Rocky Mountains.

Coloradans Protecting Wildlife and Stop the WolfPAC led the campaigns in opposition to the initiative. These campaigns had raised $871,110 to prevent the initiative from making its way to the ballot. The Colorado Farm Bureau’s Vice President of Advocacy, Shawn Martini, said, “We remain skeptical that you can introduce wolves into Colorado and not create significant problems. Not only to our way of life here in the state which is based on outdoor recreation but also on livestock production in the western part of the state and to the ecosystem. Colorado is home to a number of endangered species that could potentially be preyed upon by an apex predator like the Canadian gray wolf, so we’re skeptical that these kinds of decisions should be put in the hands of voters through a ballot initiative.” Considering the perspective of Colorado’s farmers and ranchers, it is understandable how they would be negatively affected by the reintroduction of an invasive predator into their areas. However, the proposition has made it clear that the state is willing to provide all farmers with compensation for loss of livestock. This would solve the issue that caused the extinction of the animals within Colorado in the first place.

The public has shown mixed opinions on the concept of the gray wolves. Robbie LeValley, a rancher and county administrator, claimed, “When I look at where the maps have said they would like to introduce the wolves, some of those areas are very close to our herd. I do worry about the added stress. I do worry about the decrease in our ability to manage landscapes as a whole for the benefit of not only our wildlife but also our livestock.” Contrasting this opinion, state biologist and environmental advocate Gary Skiba said, “Wolves evolved in the western United States for hundreds of thousands of years with their prey. As a result of that, we’ve seen improved environmental conditions, at least partly because of wolves in Yellowstone. I won’t say entirely, but partly. We won’t probably see the same thing exactly in Colorado, but wolves were part of how the ecosystems function. We think we need to have that back.”

The election results show that 50.9% of Coloradans voted yes on their ballot for the proposition, while 49.4% voted no. The support of the proposition won by exactly 38,874 votes. Officials have announced that the wolves will be reintroduced in December 2023. Ranchers and farmers had presented respectable arguments; however, the numbers show how a great deal of Coloradans hold a strong desire for these marvelous creatures of nature to roam the mountains again.