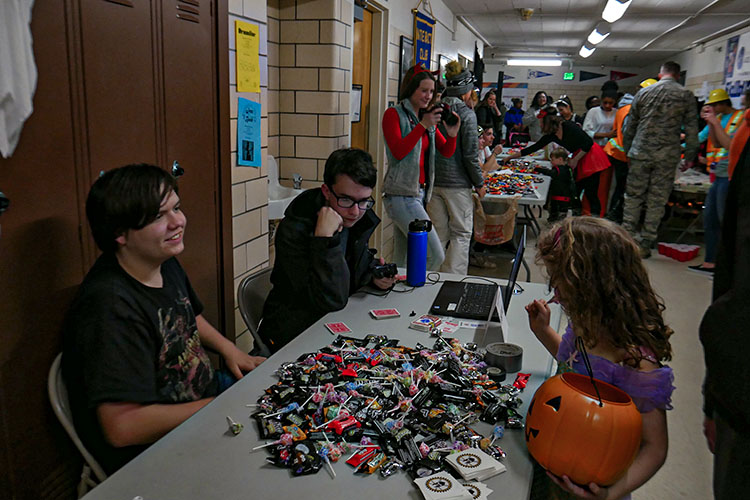 The 7th annual Trick-or-Treat Street was another huge success.

Kids all over the Denver area grabbed their buckets and costumes and rolled on by Thomas Jefferson High School’s seventh annual Trick-or-Treat Street extravaganza event that was held on Thursday, October 31st from 4:00 to 6:00 p.m..

When thinking about Trick-or-Treat Street, all that comes to mind is the idea of an actual street dedicated to Trick-or-Treating. Provided at Thomas Jefferson High School every year on Halloween, the students, organizations, and clubs all partake in a tradition where they hand out candy, host costume contests, and play games with elementary school kids. Trick-or-Treat Street began in 2012 when former Principal Suzanne Morris-Sherer contacted Career and Technical Education (CTE) coordinator and Black Student Alliance (BSA) Sponsor Danny Showers. The contact discussion was about establishing an event that would bring the TJ community together with future Spartans. As of right now, Trick-or-Treat street is primarily intended for elementary school students. It has been confirmed that the event is not open to middle school students since TJ is already involved with the neighboring middle schools. Showers explained that “fifteen clubs such as BSA, Leadership, DECA, SkillsUSA and many other organizations show up to the event.” He also mentioned that around 250 people showed up on that exciting night.

Along with other organizations that had a table during the event, some fellow mentions were Gay-Straight Alliance (GSA), Band, Robotics and Hispanic/Latino Club. During the event, Adina Wright, one of the Trick-or-Treat street’s original organizers, made an appearance for her seventh time. Wright had come to visit and see the progress of her creation in 2013 when she was here in school. Showers described,  “The president at that time was Adina Wright. She always comes every year, even after she graduated. She wants to make sure that her alma mater and her former club still have their finger on the pulse of this event.”

Trick-Or-Treat Street is a nonprofit organization that does not receive any funds unless the young child’s parent chooses to donate on their own will. The organization does not have a specific goal, other than the TJ community creating an opportunity to open up and get the neighboring schools involved with one another in a safe way. Schools like Samuels, Holm, and even Bradley Elementary School are some of the neighboring schools that come to the event. Since its first year, TJ’s Trick-or-Treat street has been a success and as years come to pass, the organization hopes to and will continue to grow in future years.