Yours to Keep Album Review 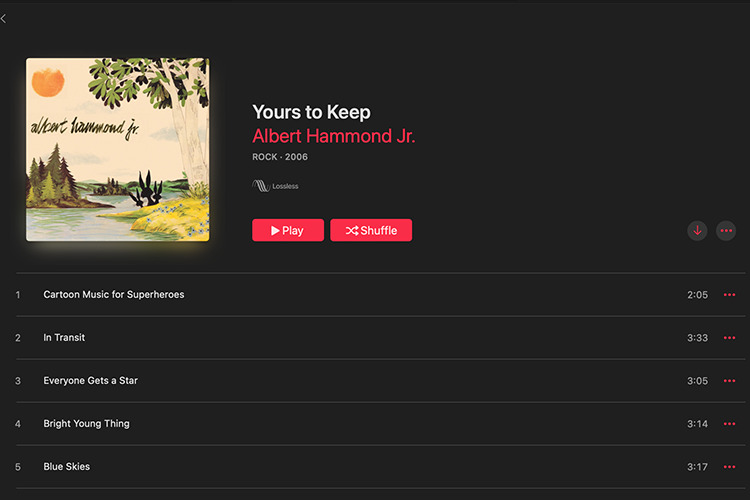 The album Yours to Keep is ready to entrance its listeners. photo by David Lopez-Vences

The Strokes guitarist Albert Hammond Jr’s first solo album is one for the ages.

Albert Hammond Jr. and his first standalone album, Yours to Keep, which was released in 2006, follows him through his many ventures throughout his life after the initial success of The Strokes. The band faced high expectations with their music and Hammond touches on it with his work. The album captures the essence of innocence and going through the ups and downs of life in its own unique way. With his signature rhythmic guitar riffs and the use of many other instruments such as trumpets, trombones, pianos, and melodicas, Hammond portrays the story of growing up under the spotlight and just trying to find himself.

In his solo album, Hammond Jr. seems to take a chance and reflects on his experiences with drug addiction, high expectations, and of course his love life. The intro track, “Cartoon Music for Superheroes” immediately strays away from what is expected from him. A lullaby can be heard which seems silly to listen to, but Hammond somehow manages to create a beautiful introduction to what’s to come forward. It’s lighthearted but elegant in its own way. Track #2 hits the listener with a riff that he made on tour before The Strokes’ debut album. The song In Transit captures a weight being lifted off one’s shoulders. A sense of freedom and an eagerness to really enter adulthood can be felt. Hammond sings his heart out being, “free from it all” but also mentioning a time where that sense of freedom made him lose himself alluding to the beginning of him going out of control in his life.

Track #3, ‘Everyone Gets A Star’ opens with the feeling of “I’m not mad, I’m just disappointed.” It follows him in his attempts to reassure his partner that he’s not like her previous lovers. He sings about wanting to be seen for himself, but ultimately his reassurance isn’t enough. “I know everyone gets a star” shows the pat on the back he gives them for their effort in trying.  The song perfectly erupts after the line “Everything just falls apart,” showcasing the failed relationship after all the effort put into it. Skipping a few tracks down, Track #9, “Holiday.” is a song all about hardship. The energy the song creates elaborates on the reflection period everyone has in their lives. Where you take a look back and know that whatever you’ve faced is in the past. The instruments start out slow which creates an eerie feeling, making the line, “Wake up, months of change have messed me up” seem so much more heartfelt. Hammond can be heard talking about having the “brakes,” or in other words, the control in his life once again. Every instrument can be heard building up after the line, “Your laughter takes me from disaster to tears, all washed away on holiday.” The tune begins to start to cheer up with his signature rhythmic guitar and of course a guitar riff that makes you feel like you’re on a beach far from home. “Our problems, time will have to solve them someday,” is the message put forth, which is perfectly showcased with how mellow the instruments are throughout the song. On March 7th, 2021, his daughter Holiday was born which makes this track seem so much more genuine and heartfelt even years after its release.

There are many more tracks on the album that I could mention, but I could talk about those all day. The album strays from norms that are placed on the guitarist and his melodical choices make it that more unique. Although it is not going to be one that makes a high school party erupt, it is always pretty to listen to when the time is right.